No products in the basket.

Hear from our MP, Chris Heaton-Harris

Just a few more days and the wonderful world of non-essential retail can reopen and Daventry can return to a new normal.

I know this has been an incredibly tough year for many and I am so thrilled that as each day passes, we are one day closer to normality. I am immensely proud of all those involved in the vaccination programme- from the very clever people who concocted them to the amazing people who volunteered to test them, the doctors, nurses and volunteers who administer them – and everyone else who is helping get these jabs into peoples’ arms. Thank you to them all! Through these joint efforts we are defeating this virus. (I was lucky enough to receive my first Covid-19 vaccine – the Oxford/AstraZeneca one – last week and I was so impressed by how smooth and organised the process was!

It is good to see a light at the end of the tunnel. The last year has been pretty crap, by anyone’s standards. In fact, over the last year, nearly 3,000 people and businesses across my constituency have contacted my office seeking assistance. I and (more often than not) my fantastic small team have done everything we legitimately can to help; ensuring businesses are paid their Government-backed grants, helping those eligible receive their vaccines and assisting with applications for financial support schemes.

People and businesses across Daventry have benefited from widespread use of all of the Government’s various financial support schemes, including the Coronavirus Job Retention Scheme (CJRS), Self Employed Income Support Scheme (SEISS), and various grants and loans dispersed to businesses by our local authorities.

Almost 7,000 Daventry employees have had their jobs protected via the CJRS’s furlough scheme and over 11,000 claims have been successfully made to the SEISS since it was set up.

By early January this year, the combined total financial support offered to businesses across my constituency alone through the Bounce Back Loan Scheme and Business Interruption Loan Scheme was over £100 million! And I thank you all for not giving up and hope to come and see as many of you as I can in the coming weeks and months as our economy reopens and motors forward.

Some of the schemes of support were administered by Daventry District Council. I am sure you are all aware, on the 6th May, we will be going to the polls to elect a total of 93 councillors for a new unitary authority: West Northamptonshire Council. This replaces the existing District, Borough and County Councils and it would be remiss of me not to thank the Council, its Councillors and Officers, who have served us so well in the past; especially over the last twelve months. Incidentally, the deadline to vote by post in this important election is 5pm on April 20th, but for those of you wishing to vote on the day, you won’t be surprised to hear that a range of Covid-safe measures are being planned for polling stations.

Finally, I obviously can’t end this without a terrible joke, so here is my most popular joke of the month: My mate swallowed a bag of Scrabble tiles. Now he’s worried his next trip to the bathroom could spell disaster. 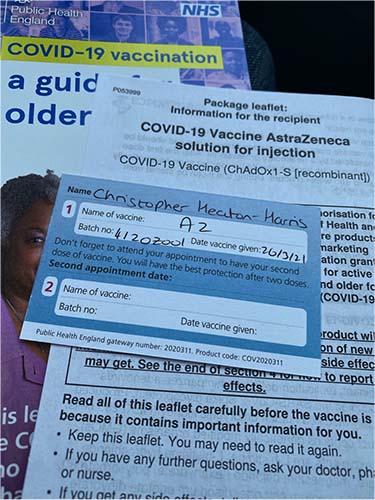 DaventryHighStreet is a local community site aimed at bringing all local shops and local organisations together along with local news and events.

We welcome all local businesses and organisations to our site. If you would like to join our community, please click the Find out more button below.